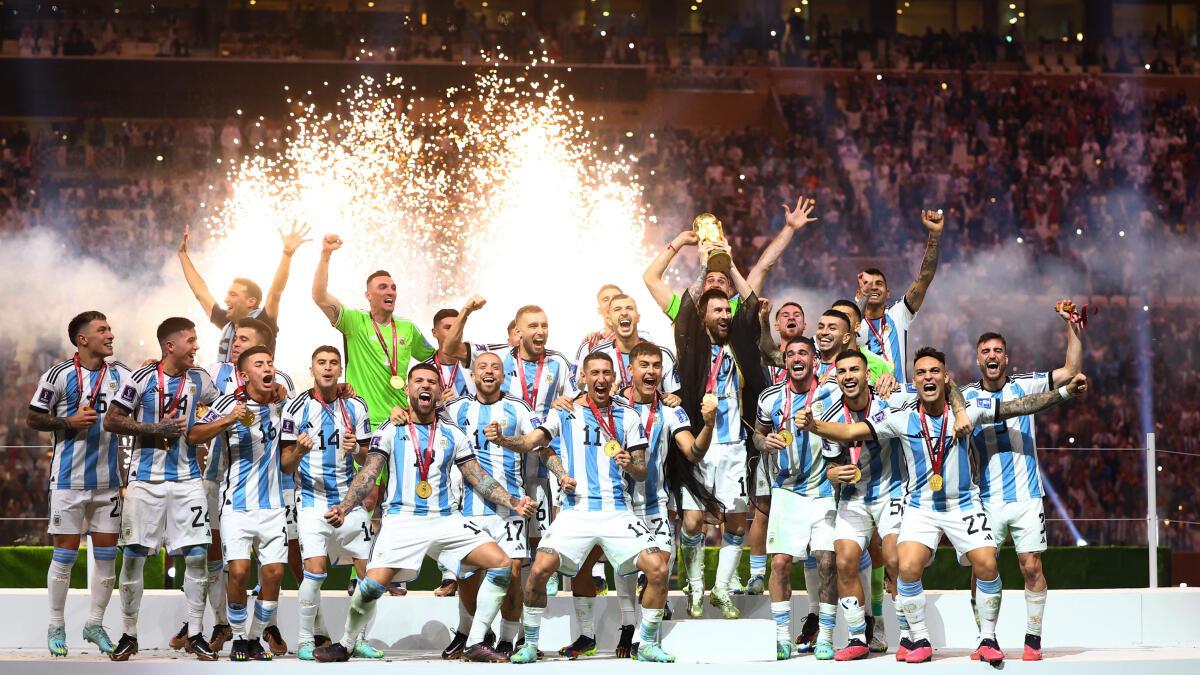 MESSI AND A. DI MARIA SCORE FOR ARGENTINA IN THE FIRST HALF.

Argentina vs. France, Fifa World Cup 2022 final highlights: Argentina spoiled the 3rd world cup win for France after winning on penalties 4-2 in a 3-3 draw match against France at Lusail Stadium on Sunday.

The excitement of the Fifa World Cup final began in the 21st minute of the match when Di Maria got the penalty for Argentina and the legend Messi himself came to the spot to net it.

Without putting in much effort, Messi shot the first goal for Argentina and his sixth of the tournament. The moment of happiness could be seen on the faces of Argentina’s fans when Di Maria netted the 2nd of the day for Argentina.

Argentina dominated the first half as France seemed to be in a defensive mode at Argentina vs. France, Fifa World Cup 2022 final Highlights.

FRANCE JOIN THE PARTY AS MBAPPE SCORES TWO CONSECUTIVE GOALS IN THE 2ND HALF.

As the second half began France joined the party when they were given a penalty kick and Kylian Mbappe, who never misses chances, converted it into a goal although the ball was not so far from the hands of D. Martinez to be captured.

90 seconds later after the penalty, Mbappe came up with his second goal in a row, making the final night a nail-biter. Looking for a lead after 2-2, Messi booted the ball, but it got perfectly dodged by Lloris.

DRAMA BEGINS AS THE GAME MOVES TO EXTRA TIME.

Both teams sharing two points each entered the extra time. In the extra time of Argentina vs. France, Fufa World Cup 2022 final Highlights, Argentina had two chances to score, but France’s Upamecano’s defense showed that it was going to be a tough nut to crack.

As the 2nd extra time followed, the real drama began when a shot saved by Lloris later hit by Messi was considered a goal by the referee.

It was assumed that L. Messi had finally done it for Argentina and hit the final goal of the night. Argentina managed to get a 3-2 lead over France.

The lead of 3-2 was soon leveled when France got another penalty and Mbappe was phenomenal that day as it was a hat-trick.

With so many attacks and saves, both teams survived the 2nd extra time hardly giving any chances to score.

ARGENTINA CLAIM THE TITLE AFTER 36 YEARS WITH FOUR CONSECUTIVE GOALS.

The 2nd extra time of Argentina vs. France, Fifa World Cup 2022 final Highlights was fruitful for both the teams, but the champions were yet to be declared by penalty shootout.

Mbappe with no doubt scored for France in the first round so did Messi. K. Coman shot the 2nd, but it was too predictable for D. Martinez, and could not convert it into a goal.

P. Dybala scored for Argentina in the 3rd round while A. Tchouameni kicked the ball unluckily it was way too wide from the net.

In the fourth round of Argentina vs. France, Fifa World Cup 2022 final Highlights, Muani’s goal did not make any difference while Argentina cashed in all the chances they had when G. Montreal netted the ball for the fourth time and Argentina became the world champions after 36 years of interval.

MESSI’S MAGIC CONTINUES AS HE DENIES HIS RETIREMENT.

After claiming the title for the third time in Argentina vs. France, Fifa World Cup 2022 final Highlights, L. Messi came up with the declaration that he will continue playing for the national team because there is still some magic left in him.

Messi won the Ballon d’Or Award for the best player while winning the golden boot, Mbappe topped the most goals by any player in the world cup list with 8 goals. Messi finishes second on the list with 7 goals.